Testing the waters against antimicrobial resistance

HYDERABAD, India, is a city of around 7 million with an average population density nearly 50 times that of Adelaide, South Australia, where I live.

Running through the middle is the Moosi River.

Hyderabad shows how well people can co-exist with much less room to move or resources to live with than Australia. One downside of a high density city without the necessary infrastructure can be seen in the natural environment, impact that occurs in large cities worldwide; a rapid loss of natural habitat and noise, air and water pollution are constant reminders of the human footprint on this region.

India receives large amounts of rainfall during the monsoon season, which is considered to have a cleansing effect on many of the river systems that can suffer from pollution but there are still serious issues relating to the population of more than a billion people having access to clean water. It is increasingly recognised that water quality, not just quantity, can have important impacts on humans, including exposure to communicable disease and pollutants that can affect human health.

It has been recognised that antimicrobial resistance is a global and significant threat to human and animal health. The World Health Organisation says it “an increasingly serious threat to global public health that requires action across all government sectors and society”, threatening our ability to treat common infectious diseases.

The Australian government has also acknowledged the risks posed by AMR and released a strategy in June 2015, with one of the objectives in this strategy highlighting the need to “strengthen international partnerships and collaboration on regional and global efforts to respond to antimicrobial resistance”.

This year, I spent five months in Hyderabad as a AISRF Early-Mid Career Researcher Fellow, at the CSIR Indian Institute of Chemical Technology, where I worked within Dr Mohana Reddy Krishna Mudiam’s National Centre for Mass Spectrometry (NCMS) group.

The assessment of environmental factors contributing to AMR, including surveillance of environmental factors (such as antimicrobial contaminants) contributing to AMR and managing these factors is increasingly seen as an area of importance in formulating effective management of AMR. This entails an enormous effort between governments, community health care practitioners, veterinarians and food producers, water utilities and researchers.

In India, the release of relatively high amounts of antibiotics into waterbodies comes from a variety of sources, including wastewater discharges from domestic, industrial, health facility and agricultural sources. Due to this variety of sources of antibiotics into the environment, identification of the sources can play an important role in implementing effective mitigation strategies. Along with antimicrobials, a number of other trace organic contaminants, including artificial sweeteners, hormones and pesticides, were also quantified alongside the antimicrobial compounds as a means of identifying potential inputs; for example, artificial sweeteners have been used to track domestic sewage, pesticides can be used for particular agricultural purposes and hormones can be associated with the presence of certain animals.

In India, we developed an analytical method for the quantitative ultratrace analysis of ~70 antimicrobial chemicals. We used this method with water and sediment samples collected in a longitudinal survey of the Moosi River watershed which runs through the middle of Hyderabad and is also fed by Hussain Sagar (lake), previously a water supply for the city. 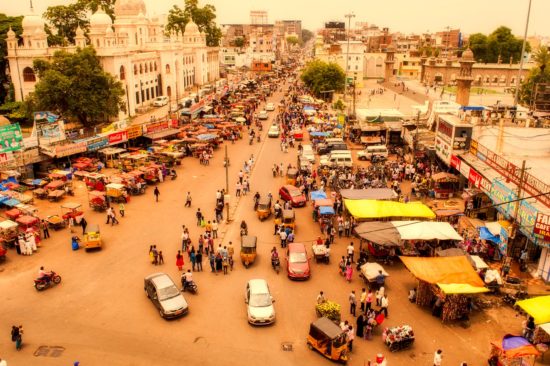