Home » “Antibiotics will soon be restricted for Canadian farmers”

“Antibiotics will soon be restricted for Canadian farmers” 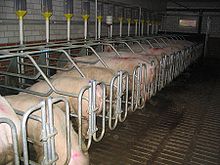 “In an effort to curb growing antimicrobial resistance, Health Canada has tightened the rules around feeding drugs to farm animals.

Livestock farmers in Canada are being urged to develop a closer relationship with their veterinarian, ahead of significant changes in how farmers will be allowed to administer antibiotics to animals. Starting in December 2018, hundreds of common veterinary antibiotics will require a prescription, issued by a veterinarian who has an active relationship with the farmer. In other words, the vet has to know the farmer’s operation on a personal level.

This change, issued by Health Canada in July of last year, is part of an attempt to curb growing antibiotic resistance, a problem that already claims 50,000 lives a year in the United States and Europe. One British study, cited by Maryn McKenna in her book, Superbug, estimates that, unless we get antibiotic use under control by 2050, the death toll will be more like 10 million people per year.

Up until now, antibiotics have been used recklessly by the animal agriculture industry. Eighty percent of the world’s antibiotics go to animals, many of them used preventatively. This means that the animals aren’t necessarily sick; they’re being dosed to avoid the outbreak of disease. A veterinary professor from the University of Guelph said in a January 4th interview with CBC Radio that 80 percent of antibiotics currently used in Canada are not prescribed.”