“The Access to Medicine Foundation warns that antibiotic supply chains are on the brink of collapse, putting basic healthcare at risk, in a new white paper titled “Shortages, stockouts and scarcity: the issues facing the security of antibiotic supply and the role for pharmaceutical companies”. Urgent action is needed to rebuild the antibiotics market. The paper shows how some pharmaceutical companies are responding.

Between 2001 and 2013, 148 national antibiotic shortages occurred in the United States alone. In 2010, 15 countries reported national shortages of injectable streptomycin, jeopardising the treatment of tuberculosis patients. An ongoing penicillin shortage is currently affecting at least 39 countries, now including Brazil, Germany, the Netherlands, the US and India. In Brazil, this shortage coincided with a syphilis outbreak that, as a result, could not be brought under control. Between 2012 and 2015, the number of babies born in Brazil with congenital syphilis has more than doubled.

“Antibiotic shortages are occurring because the antibiotics market just doesn’t work well enough. Pharma companies need to be incentivised to keep producing antibiotics. There is definitely no easy fix. But without a global push to address the systemic causes, we risk being unable to treat common infections, such as from contaminated food or simple wounds.” Jayasree K. Iyer, Executive Director of the Access to Medicine Foundation.“ 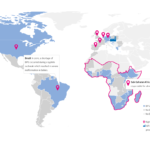