Home » Advancing Data Technologies to corner AMR 2019 » Why this Symposium? 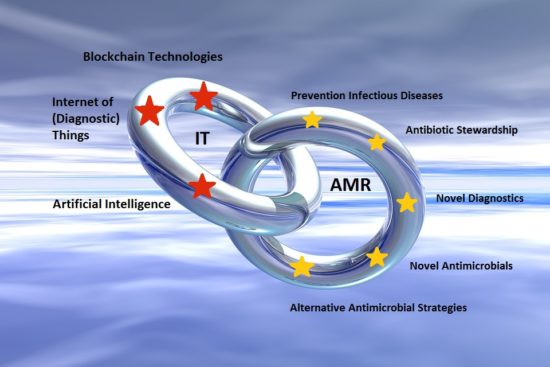 Antimicrobial resistance (AMR) is considered the biggest global threat of Health and Food Safety (Source: WHO). AMR develops when bacteria, fungi, or viruses are exposed to antibiotics, antifungals, or antivirals. As a result, the antimicrobials become ineffective and infections may persist. In addition, medical interventions including surgery including caesarian sections, chemotherapy and stem cell therapy may become impossible.

It is estimated that AMR causes 700,000 casualties per year with the low- and middle income countries (LMIC) bearing the harshest burdens. More recent recalculations indicate even substantially higher numbers. According the ‘Review on Antimicrobial Resistance’ by Jim O’Neill we may face some 10,000,000 casualties per year in 2050 with cumulative GDP losses of $ 100 trillion.

Planet earth faces the very real threat of having to survive in a ‘post-antibiotic’ era in which there are few, if any, antibiotics which effectively and affordably cure infections. The good news is that both at an international as well as at a national level action plans have been set up to fight AMR.
Traditionally these plans are based on five ‘strategies’:

Artificial Intelligence, Internet of (Diagnostic) Things and Blockchain have the potential to reverse the tide in the global fight against against Antimicrobial resistance.

Welcome to the lead group and REGISTER DIRECTLY >>